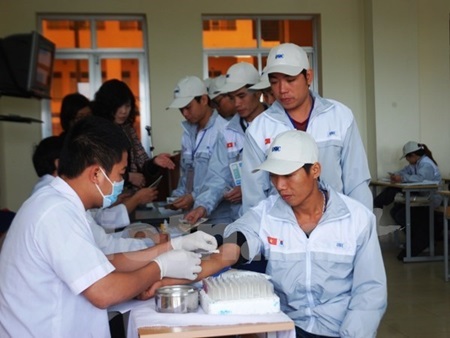 About 56,173 Vietnamese labourers, including 16,942 women, worked overseas in the first six months of the year, a 1.7 per cent increase compared with the same period last year.

This was revealed by the department of overseas labour (DOLAB) under the labour, invalids and social affairs ministry.

Statistics from enterprises showed that in June, about 11,777 labourers went abroad for work. Of them, more than 3,619 were women.

Taiwan is the top market for Vietnamese workers with 7,505 labourers, followed by Japan (with 2,324 workers), South Korea, Malaysia and Saudi Arabia, besides Qatar.

The labour, invalids and social affairs ministry (MOLISA) has signed and implemented a memorandum of understanding with South Korea on sending Vietnamese workers to that country under the Employment Permit System Programme. The preparation for the signing of memorandum of understanding between Viet Nam and Thailand, and Viet Nam and Malaysia on labour co-operation is under way.

DOLAB has supported enterprises to carry out contracts on sending labourers to Saudi Arabia and Qatar and in dispatching apprentices to Japan in the construction and shipbuilding sectors since April. The department has also implemented training programmes on vocational skills, foreign languages and other necessary knowledge required by people who want to work as domestic workers in Taiwan.

Last week, Viet Nam and Germany signed a letter of intent regarding Vietnamese citizens working in Germany as caregivers. This is a good opportunity to increase the number of Vietnamese labourers going to that country to between 500 and 700 per year.