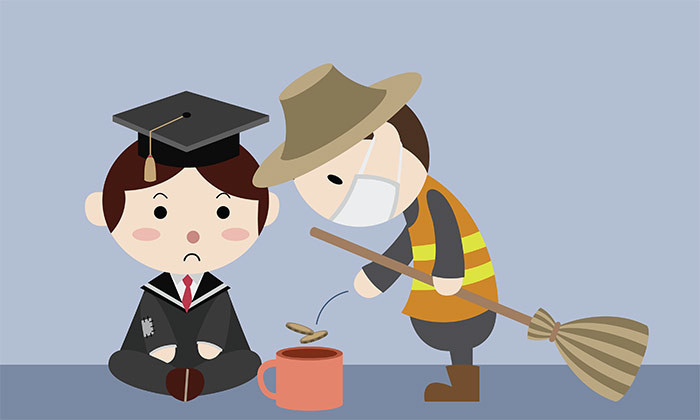 In the past two decades, Hong Kong has seen higher education becoming much more popular than ever before.

That number rose 50% to 18,459 in 2013-14 and that does not include the abundance of graduates from self-funded degree programmes offered by various intuitions.

The consequence of having so many university graduates is that they become mediocre in the eyes of the industry.

Taking inflation into account, the HK$1800 “pay raise” means a huge step down in earnings.

Data from the department also shows that during the same period tuition fees went up by 75% and property prices by nearly three times.

The 75% tuition fee increase has not taken the fees of self-funded programmes into account, which could be anywhere between HK$60,000 to HK$100,000 a year. And, the actual spending on getting a university degree for today’s youngsters can be a lot higher.

ALSO READ: Are degree holders no longer an elite group in Hong Kong?

The abundance of graduates is to be blamed for the drop off in compensation.

He also criticised local students for their poor working attitude.

“Just 10 years ago, fresh graduates would do 120% and outperform, as they believed they could learn from work and wanted to stay competitive. Now young people only do 80% of their work. They think, ‘how much you pay, that’s how much I work’.”

“University graduates were real talents two decades ago. They were the best of the best. If the young generation is less productive, why should they be paid more?” she told SCMP.

She also believes the sluggish economy is also a reason for the slow gains in young people’s income, pointing out a 15% drop in the number of job offers made to university graduates this year.

Most of her clients are now offering fresh graduates  HK$10,000 to HK$12,000 to work as marketing or administration assistant, while a mobile app programmer can get up to HK$14,000 monthly.

Share with your friends:
Tweet
How the little things add up in making a difference to diversity Deutsche Bank and Honeywell’s top healthcare programmes