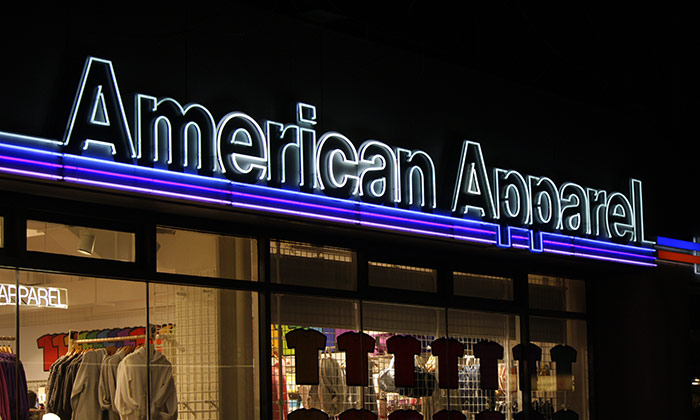 American Apparel has come under fire from customers and critics for yet another controversy.

Following the suspension – and eventual firing – of controversial American Apparel CEO Dov Charney, the retailer has made headlines for suggesting their sales associates wear T-shirts with suggestive slogans on them this coming Black Friday.

An employee of the brand recently emailed The Mary Sue claiming the new T-shirts and buttons that were distributed to staffers for use on Black Friday bore the slogan: ‘Ask me to take it all off’.

“Although our source initially understood that the shirts were mandatory for Sales Associates at American and Canadian stores, she says employees instead have the option of wearing a black shirt with an “Ask Me to Take It All Off” button on it,” The Mary Sue reported.

“In an email, employees were told ‘All stores will be receiving special button pins and t-shirts to wear ON Black Friday! Shirts are optional, however, employees are highly encouraged to participate.’”

The anonymous employee said the campaign will remind female staff and customers “that a woman’s body is never hers alone”.

Here is an excerpt from the email:

“I understand that American Apparel, the corporation, doesn’t see me as a real person and aims to commodify my sexuality in order to sell their product. I still work for them because in the past, I have always had discretion about how I choose to present myself at work (so long as I wear AA head to toe).”

“Now they are actively encouraging our patrons to sexually harass me and my colleagues, some of whom are as young as 15. A lot of our retail workforce is made up of high-school aged girls. There’s no question in my mind that anyone wearing the shirt will face inappropriate comments from customers.”

“This slogan on these tee shirts – which were distributed to both male and female employees as optional – was originally intended to be a play on words to engage customers during our Black Friday Sale, which features an additional 50% off items that are already marked down 50%.

“We understand that this offended an individual employee who spoke up about his / her concerns. American Apparel is a company that values free speech, and most importantly, creating an environment where employees feel valued, protected, and safe.

“As such, we have decided to discontinue this slogan and will seek other ways to stay creative and push the envelope, which is part of our brand DNA.”

Read the full article from The Mary Sue here.

Share with your friends:
Tweet
Are Your Employees Looking For a New Job? Fewer firms to throw office holiday parties this year