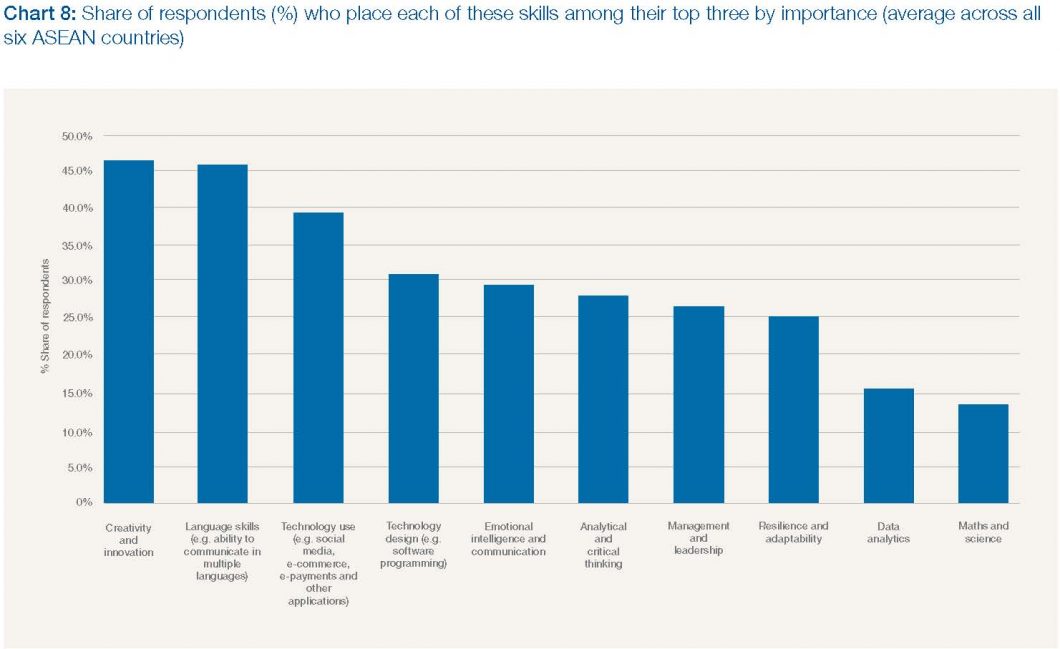 With the emergence of new technologies such as blockchain, artificial intelligence, and the internet of things (IoT), Industry 4.0 ensures we are living in an era of deep and rapid changes to job markets worldwide.

Against this backdrop, it’s interesting to see that when asked which skills they believe will be most valuable in the future, ASEAN youths placed higher value on soft skills than hard skills.

In a World Economic Forum and Sea survey of 56,000 ASEAN citizens aged 15–35 from six countries (Indonesia, Malaysia, the Philippines, Singapore, Thailand and Vietnam), the three skills considered the most important were:

On the flip side, the least highly valued skills were: data analytics; and maths and science. The skills youths value vary by country, perhaps influenced by the composition of important local industries. For instance:

Overall, given the importance placed on soft skills, it’s no surprise that ASEAN youths regarded themselves in stronger in soft skills than hard skills.

In fact, the four lowest ranked skills were mostly hard skills in the STEM area such as technology design (e.g. software programming); language skills; as well as maths and science. Whereas of the top four skills, three were soft skills including resilience and employability; emotional intelligence and communication; as well as creativity and innovation.

This self-diagnosis aligned with other international assessments which ASEAN youths underperform in, with the exception of Singapore.

For instance, in the PISA which measures the maths and science skills of 15-year-olds in 70 countries, Indonesia ranked 62/70, and Thailand ranked 56/70. While Singapore was an outlier in the region, consistently ranking first on the PISA assessment.

Combining the views of ASEAN youths on which skills are important, and which they are good at, perceived skills gaps that stand out were: On the bright side, ASEAN youths saw a strong need to upgrade and invest in their skills to stay relevant.

The picture varies by country with the Thais being most confident in the durability of their current skills, while the Vietnamese believing their skills need to be constantly updated over time. Implications on businesses and HR leaders

With the strong concern among ASEAN youths to keep skills constantly updated, of the 14 different options given, their primary reason for changing jobs was, unsurprisingly, ‘for better opportunities to learn and develop’. This was followed by ‘for better salary/income’.

Additionally, 5.7% reported having lost a job because their skills were either no longer relevant, or technology displaced their job. For organisations and HR leaders, this suggests a strong need to increase investment in human capital development – both to ensure a high-quality workforce and as a source of competitive advantage to attract and retain workers.

Potential areas to up investments include on-the-job training, internships, and overseas job rotations.

The proportion of ASEAN youths saying they learn important skills through formal on-the-job training is relatively low, making this both an imperative and a big opportunity for businesses and HR leaders.

Internships are another area of opportunity, with 81.4% of ASEAN youths believing that internships are either equally important or more important than training in school. Additionally, the survey revealed that a valuable strategy that can be adopted to upgrade the skills of ASEAN youths is working overseas. Across all six ASEAN countries, 46.4% were keen to spend time working overseas in the next three years.

For businesses and HR leaders, this suggests overseas assignments/ job rotations as possible areas to look at when exploring development options for staff.