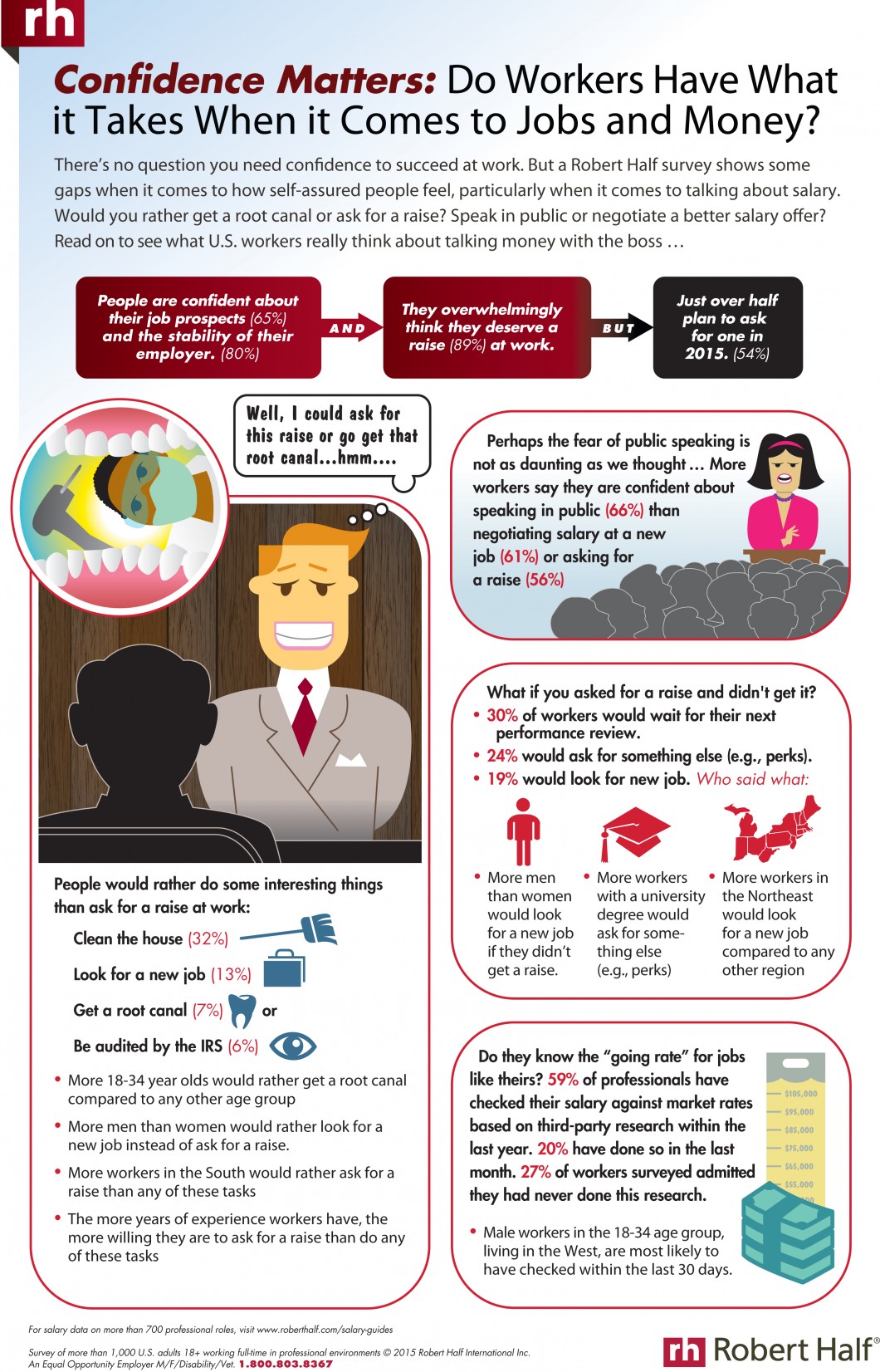 Most of us want more from jobs and do look forward to performance appraisals and pay hikes. But on the contrary, in Canada while majority of the workforce is confident of its abilities and performance to deliver better, they generally do not ask for pay hikes.

According to research from staffing firm Robert Half, 83 percent of the Canadian workers want to earn more money on jobs, but only one-third feel confident to ask for a raise. It is to be noted that Canadian workers are generally happy at their workplaces and feel upbeat about their current company and job prospects, and 73 percent of the employees are confident about the stability of their employer.

‘Confidence Matters’ research project by Robert Half outlines workers confidence levels and attitude towards their career, taking into consideration contentment on job and salaries paid. As a part of this research initiative in Canada, more than 1,000 full-time employees were surveyed in their office environments.

“Employees with a firm understanding of their local hiring atmosphere have a definite advantage when it comes to asking for a raise,” said Greg Scileppi, president of Robert Half, International Staffing Operations. “Without proper research, you run the risk of either being unreasonable in your demands, or lacking the confidence to negotiate decisively.”

Key findings from the research are:

Another research published earlier this month by the Canadian Federation of Independent Business (CFIB) and the Fraser Institute concludes that both federal and municipal public employees receive greater compensation than private-sector counterparts.

Municipal government workers across Canada are making $6.43 more per hour on average in wages and benefits than their private sector counterparts – a gap of 22 per cent – according to the latest report from the Canadian Federation of Independent Business (CFIB). These excess wages and benefits cost taxpayers $3.4 billion per year.

CFIB executive vice-president Laura Jones said, “Canadian cities don’t have a revenue problem. Cities, big and small, are spending well beyond their means. They have a spending problem. And a lot of it has to do with employee compensation that is well beyond what’s fair and reasonable – an extra six bucks an hour is a lot more than pocket change.”

“Self-confidence is the foundation of a successful career,” said Paul McDonald, senior executive director at Robert Half. “Your professional growth and earning potential depend not just on the demand for your skill set, but also on your willingness and ability to negotiate with current and prospective employers.”