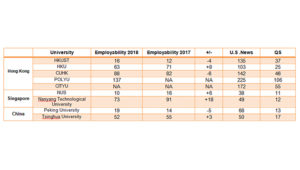 The Global University Employability Ranking, designed by a French HR consultancy Emerging and published by Times Higher Education (THE), has listed the top 150 institutions for employability.

It is no surprise that Harvard University or University of Cambridge snatched the top seats again.

There is a total of 26 East and Southeast Asian institutions in the top 150 this year including Japan, South Korea, Singapore, China, Malaysia, Hong Kong and Taiwan. There are seven and six universities in China and South Korea in the top 150 respectively.

58 universities in Europe including Germany, France, The United Kingdom, The Switzerland, The Netherlands, Spain, Denmark, Finland and Sweden are ranked among the top 150 universities. France and The United Kingdom hold steady this year, each retaining 10 institutions. Germany, with 13 universities on the chart, has doubled the data in 2011 and has become the most-improved European country.

The U.S. continues to experience a sharp decline (-21) in performance compared to seven years ago, despite its overall domination (34).

Two universities in Singapore have improved their rankings compared to last year.

National University of Singapore has made to the top 10 most employable university, while Nanyang Technological University has increased 18 places.

NUS President Tang Eng Chye commented on Today that NUS strives to ensure that the graduates are well-prepared for the digital economy, with deep expertise in and across disciplines, core life skills as well as a growth mindset that will position them well for a world of disruption and change.

University of Malaysia is ranked as 149 this year.

Seven universities in China have snatched their seats in the top 150 this year, with four in top 100.

Although only three out of seven Chinese universities have moved up their ranks, this is still a huge advance for mainland China in a bigger picture. In 2011, only four universities were in the top 150.