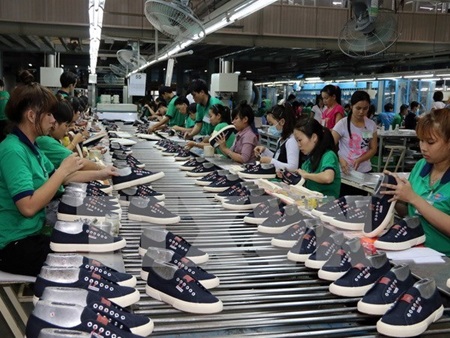 An increase in the regional minimum wage in 2016 has not yet been finalised because of differences over the margin of increase of the wage.

The monthly minimum wage varies across the four regions based on the cost of living and location.

Mai Duc Chinh, vice-chairman of VGCL, said the adjusted rate was being made to offset currency depreciation and would be based on current socio-economic conditions and the demand for meeting the basic living costs of workers and their families.

A minimum wage hike of 15 to 16 per cent would meet 89 per cent of minimum acceptable living costs, Chinh said.

Although when the VCCI later suggested an increase between 10 and 11 per cent, the VGCL didn’t agree with it. The VGCL said even at that rate, the minimum salary for 2016 was still too low and would not help workers enjoy a basic standard of living.

The VGCL said it was lower than the minimum wage hike of 15 per cent last year.

VCCI Vice-President Hoang Quang Phong said their proposed increase was appropriate because 70 per cent of the businesses were unable to generate profits. Thus, a wage rise would add to their burden.

A minimum wage increase would not only meet labourers’ basic living costs, but also ensure the development of enterprises, he said.

Phong said with a minimum salary rise in 2015, enterprises would have to face a 35 per cent increase in expenditures, and a new minimum wage should take into consideration the enterprises’ expenses.

The plan will be submitted to the Government for approval in October and will take effect in 2016.

Share with your friends:
Tweet
Avoid These 10 Wrong Ways to Do Employee Feedback Employers urged to retrain workers as automation destroys old jobs