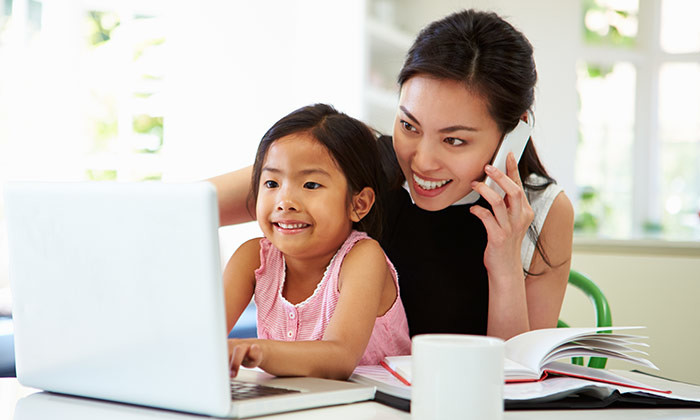 Leaving their children to go to work has always been a difficult choice for working mothers around the world – but here’s some news which might help bring some cheer to the situation.

The study found daughters of working mothers are more likely to be employed, work more hours, and earn higher wages than women whose mothers stayed home full time, after examining data from 50,000 people, aged 18 to 60 from 25 developed countries.

In the United States, adult daughters of working mothers earned 23% more than those whose mothers had not worked during their daughters’ childhoods, earning an annual average income of $35,474 compared to $28,894.

Over 33% held supervisory positions, compared to roughly 25% of their counterparts with  stay-at-home mothers.

This trend was echoed, in fact, among across all 25 developed countries in the survey – women whose mothers had worked earned 6% more than daughters whose fathers were the sole breadwinners. More than two out of 10 (21%) of women with working mothers held supervisory roles, compared to 18% of women with stay-at-home mothers.

Professor Kathleen McGinn, who led the study, pointed out that there is no single policy or practice that can eliminate gender gaps at work and at home.

She added that working moms should feel good about the models they’re setting for their children.

“Working moms affect their children’s gender attitudes, their beliefs about what is ‘right’ and ‘normal’ for women.They learn that it’s reasonable for women to work and for men to be involved at home.   They also do as well, if not better, at school, both in terms of academic achievement and behavior, as kids whose mothers stay home,” she said.

However, the researchers added that the working mother effect does not extend to sons in the workplace.

Sons with stay-at-home mothers were as likely as those with working mothers to hold supervisory positions and earn comparable salaries.

Sons of working mothers did do better, though, when it came to domestic duties.

Of U.S. men surveyed, those who had working mothers spent nearly twice as many hours on family and child care as those hailing from more traditional households – a weekly average of 16 hours compared to 8.5 hours.