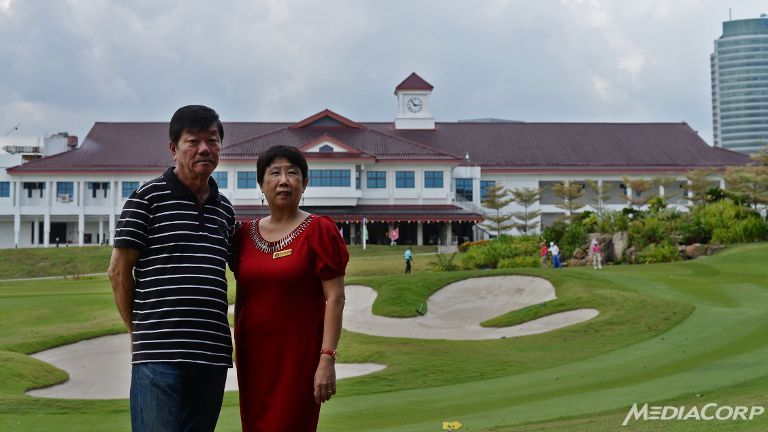 Housekeeping attendant Too Chon Hai has been working at Jurong Country Club for close to four decades, and counts the members as his regular drinking buddies. He also plays golf with them, often returning on his only day off each week for a swing or two on the 18-hole course.

But Mr Too, 67, will soon have to decide whether to find a new job or retire as the clock ticks down to November next year, when the club will have to make way for the construction of the Singapore-Kuala Lumpur high-speed rail terminus.

Since the Government announced in May its compulsory acquisition of the club, which caught members and employees by surprise, the club has set up a task force to work with the Singapore Land Authority.

It is in the midst of obtaining a valuation and will submit its claim to the authorities in early October. The original deadline of Aug 3 was extended by two months at the club’s request.

Three of the 112 employees have also quit to take up new job offers. The club will be working with the Attractions, Resorts and Entertainment Union to find new jobs for the remaining employees. The management also plans to send about four in five employees for courses at the Devan Nair Institute for Employment and Employability nearby to refine their interview skills, resume writing and computer literacy.

General manager Farrock Ebrahim met with employees the day after the announcement in an emotional session. “He assured the staff members that they’re still valued and (expressed the) hope that they would stay (until operations cease),” said assistant human resources manager Teo Peh Yen.

“Our staff members have different backgrounds. Some of them have wives and young children to feed, so it’s critical that we help them,” said Ms Teo. Other country clubs have also offered to hire them, she added.

Despite fretting over the future, the employees have come to terms with the news in recent months, although some still hold out hope for an extension.

“The morale was a bit low in the first few weeks. Now it’s back to normal and people are concentrating on their work,” said information technology assistant Samuel Ee, 27. “But I’m still hoping for a miracle.”

“Everyone was shocked because (from now to next November is) such a short span of time,” said golf operations manager Ng Yuk Fong, 58. “It’s like a doctor telling you that you have Stage Four cancer … To close this place is really a pity, and I’m still hoping for an extension.”

But the management has ruled out the possibility.

A second members’ meeting is in the pipeline, after a first meeting attended by around 500 members in May. The club intends to hold an extraordinary general meeting next month.

When the time comes to vacate the 67ha site, the staff will take with them fond memories of the camaraderie and family spirit that have enjoyed at the club for an average of 10 years each.

What drew Mr Too to his job back in 1976 was a love of golf. Back then, the club was beside a mangrove swamp. The sleepy Jurong East estate was still relatively undeveloped and the sprawling malls that dot the landscape today did not exist.

“I like playing golf, and I knew that I could play it if I worked here,” said Mr Too. “After working here, I felt that the members were very nice and didn’t put on airs. They’re like my boss, friend and family member all in one.”

One golfer would even bring fresh fish to the club’s kitchen every Saturday and have the chef prepare it, with everyone getting a share, said Ms Ng.

When the toilets clogged, the club’s managers did not shy away from rolling up their sleeves to help fix the problem. They would also drive out to buy lunch for their employees, she said.

“Have you ever seen a manager offer to buy you lunch? Because we do not have transport and he’s the one with the car. That’s how they looked after us.”

Share with your friends:
Tweet
Temporary steps give SMEs some flexibility on foreign workers In 2014, MSF helped more than 350 people with disabilities find jobs: Tan Chuan-Jin