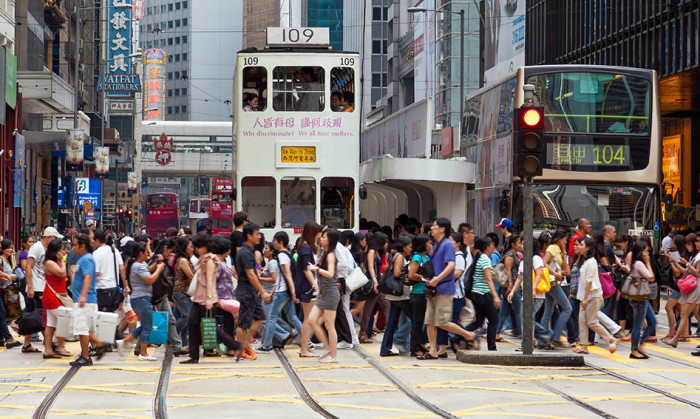 Clean Air Network together with Friends of the Earth, the Conservancy Association, and Designing Hong Kong, submitted their proposal to Hong Kong’s Town Planning Board last week to make a section of the road off-limits for cars.

Their proposal serves to counter a controversial submission by retired planner Sit Kwok Keung to rip up tram tracks in Central and Admiralty to create more space for cars and buses.

Under the proposal, the lanes adjoining either side of the tram tracks along a one-kilometre stretch of Des Voeux Road Central from Pedder Street to Morrison Street can be set aside for pedestrian use only, with the centre strip of the road remaining open for trams and environmentally-friendly buses.

“Under our proposal there would no longer be traffic jams in Central,”  Kwong Sum-yin, chief executive of the Network told the South China Morning Post (SCMP).

“During lunchtime, office workers can come down here and have lunch with their friends. With less traffic, the air will also be fresher.”

Melonie Chau Yuet-cheung, senior environmental affairs officer at Friends of the Earth, added the trams could travel 20% faster under the plan with less traffic in the district.

Lee Cheung Hing, a street vendor who has been selling clothes along Des Voeux Road Central for 30 years agrees.

“During Occupy Central when the nearby roads were blocked, my business actually improved because there were more people walking on the streets,” the 72 year old told SCMP.

“When the vehicles are running on the road, it is not like the passengers can or will immediately stop if they see a shop they like. So if people actually had to walk, that would help my business.”

He described the air pollution along the road at present as “terrible”.

Maggie Ng, who works in Central, backed the idea and said it would not cause her any inconvenience. She added that she supported the idea of continue to have teams in Central

“We cannot say the trams need to get off the roads because they are old. People get old too.” she said.

The green groups said they submitted their proposal to the board because they want the public to know that anyone in Hong Kong could play a role in the city’s urban planning.

ALSO READ: Is the commute to work burning your employees out?