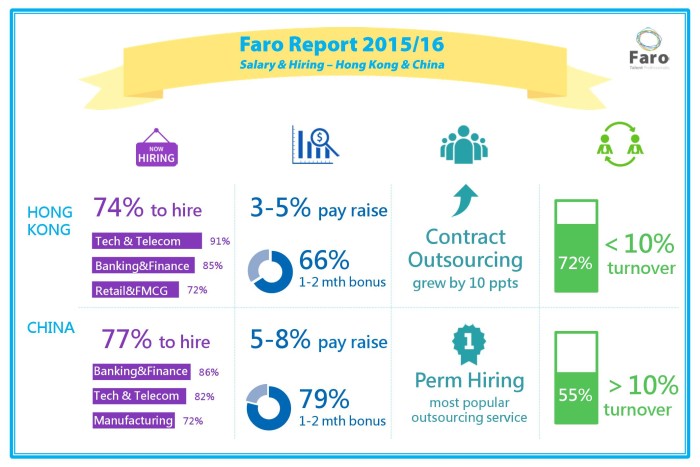 Despite a gloomy economy outlook for the year, employers in Hong Kong and on the Mainland are still confident in the job market, with most planning to expand their headcount.

According to Faro Report 2015/16, local employment market remains active with 74% employers looking to hire in 2016 with up to half saying they are are hiring for expansion.

The most ambitious employers are from the tech & telecom sector, 91%  said they have hiring plans, followed by  in banking & finance (85%) and in retail & FMCG sectors (72%).

On the Mainland, recruitment intentions are more or less the same as Hong Kong,  77%  are looking to hire. 86% in banking & finance, 82% in tech & telecom and 72% in manufacturing sectors foresee robust hiring activities.

However when it comes to offering salary and bonuses employers are less generous than the year before.  60% of respondents in Hong Kong project a 3 to 5% salary raise for 2016. For bonuses, 66% are offering 1 to 2 months of the basic salary. Only 9.7% are planning to give out over 2 months, down by 8 percentage points from the previous year.

The same goes for mainland employers, 6.8% are offering over 2 months of bonuses, 14.7 percentage points lower than the year before. 70% of respondents expect their payrolls to increase by 5-8% in 2016. For bonuses, 79% are planning to distribute 1-2 months.

In Hong Kong, 72% of respondents reported a turnover rate of lower than 10% last year; the proportion increased by 16.7 percentage points from 55.3% in 2014, suggesting a lower overall turnover in 2015.

On the mainland, 55% of respondents suffered from a turnover rate of above 10% last year, stood at a similar level to that in 2014.

Although hiring of contract staff is becoming more of a trend recently in Hong Kong, with 9.4% more employers reporting the use of contracts in 2015 compared to 2014, permanent recruitment is most prevalent outsourcing service with a participation rate of 62%

On the mainland, permanent recruitment also remains the most popular form of recuitment with a participation rate of 68% last year, followed by payroll at 29% and temporary project recruitment at 22%.

The  research was conducted among 240 key employment decision makers at MNCs and local enterprises in Hong Kong and China.

“We’ve seen Hong Kong further exploring its fintech innovation, and the mainland is embracing a new wave of rising sectors to fuel its growth as the country’s structural reform gains steam. Moreover, job seekers are becoming more active in searching for new roles within their industries and cross-sector opportunities,” she said.

Ushering into 2016, she expects these trends are poised to exert a significant impact on recruitment scenes in both regions and would drive up staff turnover rate.  “Talent attraction and retention becomes a main challenge for corporations to maintain their competitive edge, especially for those facing organizational change and skill shortfall,” Cheung said. ALSO READ: Job hoppers in Hong Kong can expect pay rises of up to 30%

Share with your friends:
Tweet
Is Hong Kong falling behind in using technology at the workplace? HSBC chairman announces resignation