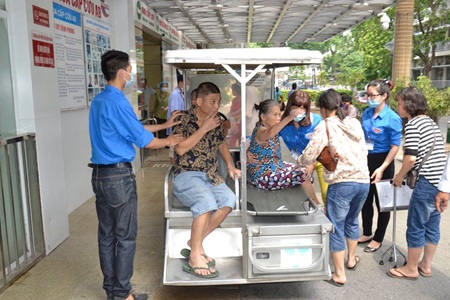 The Bach Mai, Viet Duc, Cancer and Paediatrics hospitals have signed a joint commitment to improve health workers’ attitude towards patients at a conference today in Ha Noi.

They are the country’s first medical facilities to sign such a commitment.

The move is part of the health ministry’s plan, launched in April, to improve the satisfaction of patients and the image of the Vietnamese health worker.

“A section of healthcare workers still do not follow professional processes and have inappropriate or negative attitudes towards patients in hospitals,” Health Minister Nguyen Thi Kim Tien said at the conference.

healthcare workers and destroy people’s belief in more than 400,000 health workers in the country.

“A code of conduct for health workers, which will be introduced in the healthcare system from the central to the local levels, provides rules of conduct for medical staff towards patients during examination and treatment,” Tien said.

The health minister asked all health workers and staff to overcome difficulties and be determined to improve their image.

Under the framework of the plan, the health sector will carry out a series of measures to improve patients’ satisfaction in hospitals. A circular on health workers’ dress code has been issued within the hospital system nation-wide.

Patients would also be helped by young doctors and volunteers. Mailboxes will be set up at convenient places in hospitals to receive patient’s opinions. The health ministry has already established a hotline to collect people’s feedback or complaints.

Last week, the ministry, in collaboration with the Viet Nam Youth Union and the Young Physician Association, launched a campaign to help patients in hospitals.

The health ministry statistics showed that the ministry’s hotline received more than 8,400 calls during the first half of this year. Among them, 388 were complaints about inappropriate behaviour of health workers in medical facilities, or 12 per cent of the total calls, a decrease of seven per cent compared to 19 per cent in the same period last year.

Share with your friends:
Tweet
Which company has the best CSR practices in Asia? 6,000 MAS employees expected to receive compensation on September 7, says union