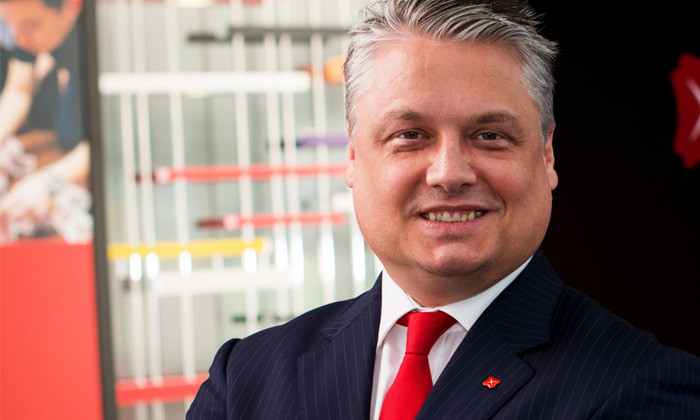 The digital way of life cannot be taught in a classroom. Find out how DBS Bank got its long-time bankers to think like a start-up, in this case by Laurence Smith, the company’s managing director of HR and group head of learning and talent development.

DBS must transform itself to be as agile, innovative and fast-to-market as the famed “GAFA” companies of Google, Amazon, Facebook and Apple (and in Asia you can add Alibaba).

While simultaneously living with the reality of being a tightly regulated industry, DBS must also compete with hundreds of innovative Fintech start-ups that pick off some of the most profitable areas of banking.

Future leaders must be deeply immersed in the digital world so they really understand both the opportunities and threats, and can move faster than the competition. But how do you “get digital?”

Digital cannot be “taught in a classroom” and long-time bankers, especially those who have grown up in an industry defined by branch banking, may even see digital as a threat, while others believe that regulators will always protect the industry.

The DBS learning and talent development team (LTD), in partnership with DiG (DBS Innovation Group), has created an innovative programme that has had a dramatic impact on the digital mindset and capabilities of leaders across DBS.

The famed #DBSHackathon series has changed the mindset of hundreds of leaders across the bank and is the first phase of an integrated programme designed to develop a digital mindset in every DBS employee before the end of 2016.

Long-time bankers, especially those who have grown up in an industry defined by branch banking, may even see digital as a threat, while others believe that regulators will always protect the industry.

Over the past six months DBS has run four five-day programmes, each beginning with a digital master class, and then leveraging human-centred design and “lean start-up” thinking in a hackathon with real start-ups, to develop app prototypes that solve real business challenges.

Senior business leaders have been fully involved as challenge sponsors and speakers, with group CEO Gupta, group head of HR Lee Yan Hong, and head of innovation Neal Cross, the judges in the finals where nearly 100 senior leaders, partnering with 20 start-ups from across Asia, competed for the grand prize.

This formula has proven extremely successful and far exceeded our expectations. While the original objective had been to help employees develop a digital mindset, we found it to be both an extremely powerful form of “action learning” and a way in which employees have to live our values to succeed in the extremely competitive hackathons.

In addition, by giving them real business problems to solve – and having them work with a start-up for a 72-hour hackathon – we have produced 50 app prototypes, several of which are now being built as actual new products for clients.

So what started as a way of “training” to be more digital has ended up as a very powerful product ideation process and, in fact, two of the prototypes have already been built into full apps and are about to be launched, with another eight under review by sponsors.

Over the past six months DBS has run four five-day programmes, each beginning with a digital master class, and then leveraging human-centred design and “lean start-up” thinking in a hackathon with real start-ups.

Talent from one of the winning teams described the experience as “mind-changing”. One said he had never realised he had been seeing the world in analogue until he “saw it all in digital”.

Like black and white TV, once you’ve seen colour TV, you can never go back. So this formula of making senior bankers act like a start-up for 72 hours has had a real long-term impact and helped them pass the tipping point of “getting digital”.

Moving forward, other developmental activities will include rolling out a three-day “digital mindset boot camp” across the region, as well as leveraging one of the apps that enables employees to create digital challenges for each other and compete on a gamified leader board to get points on the bank’s innovation index.

Young talent who have been through the boot camps and hackathons will be empowered to reverse-mentor senior leaders and even help them get more points on the digi-challenge app than their peers, adding an element of fun and competition to the learning.

“Getting digital” is one of the bank’s top three strategic priorities and the #DBSHackathon series is just a part of the solution, but one that has already had a big impact on the way people think.

That effort was recently recognised by the CEO – jointly awarding the HR and innovation teams with the CEO’s innovation award.

Share with your friends:
Tweet
Would you rat on your boss? Can you pay your employees to be creative?