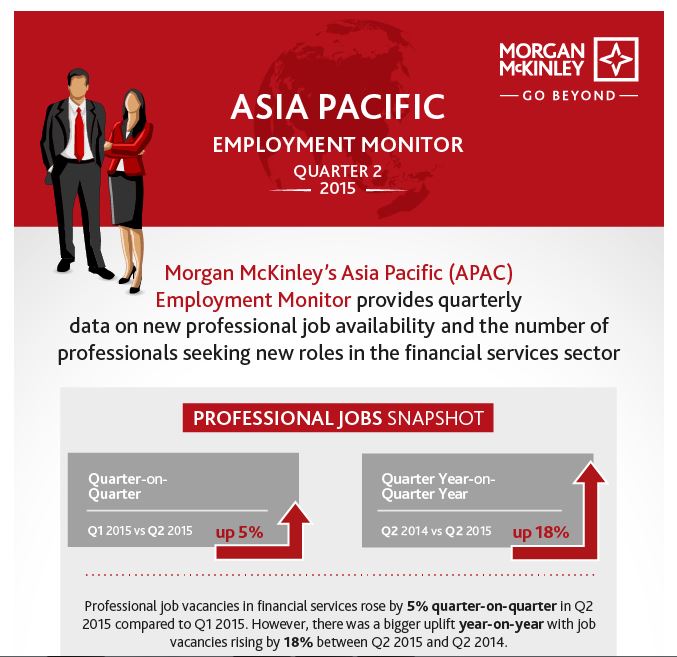 The Morgan McKinley Asia Pacific Employment Monitor for Q2 2015 shows that the long-term trend in vacancies continues to outpace the growth in those seeking new employment. On a year-on-year basis, vacancies rose by 18% from 13,576 to 16,052 in Q2 2015 compared to Q2 2014 in Asia Pacific markets.

Those seeking new employment was relatively flat (-2%) year-on-year. The statistics indicate that there is still acceleration in the job market. On a quarterly basis, both vacancies and job seekers increased at a similar pace, 5% and 8% percent respectively.

“This long-term trend is positive for job seekers and it indicates that there is still a shortage of skills in the market” said Richie Holliday, Chief Operations Officer, Asia Pacific. “People with the necessary skills are now in a better position to negotiate improved compensation packages.”

Recent bonus packages have been good and, since job seeker numbers are stable, it appears that companies are doing more to retain staff and overall job satisfaction is at a comfortable level. The second quarter showed a pickup in private wealth jobs in Singapore and Hong Kong, both important regional hubs for the sector, the Asian equivalent of private banking and wealth management centres in Europe such as Switzerland and Luxembourg.

Due to long established expertise and infrastructure, many wealthy individuals across Asia prefer to have their wealth managed from Singapore and Hong Kong. “There is demand for private bankers and wealth managers,” said Richie Holliday, Chief Operations Officer, Asia Pacific.

“As a result of the regulatory tightening of compliance and Know Your Client (KYC) requirements, the added inflows have also increased demand for supporting roles in fund administration and compliance.”

However, M&A and corporate finance activity has not been rapid in Asia, like in Europe and USA, but deals that are global in nature demand input from the local expertise in Asia region. Many IT firms are soon realising that they are behind when it comes to security practices and measures. Hence they are making decisions to comprehensively renew and build these capabilities. This often requires multiple hires in IT-related roles, creating a number of job opportunities in IT industry in Asia Pacific.

Briefly spanning through each country in Asia, here are some insightful details on different markets:

Despite these situations, statistical findings show confidence among job seekers throughout recent events, with both year-on-year and quarter-on-quarter increases in those seeking new roles. As a result, additional opportunities have grown year-on-year to accommodate this fresh pool of talent.

Considering the mixed economic data across the Asia Pacific region, the financial industry is proving resilient, with continuing growth in vacancies. It remains to be seen if the drop in Chinese equities continues and what effect, if any, it will have on the region in the third quarter. Employers are continuing to hire staff and many of the roles are long-term corporate infrastructure related, indicating confidence in the market for the near future.