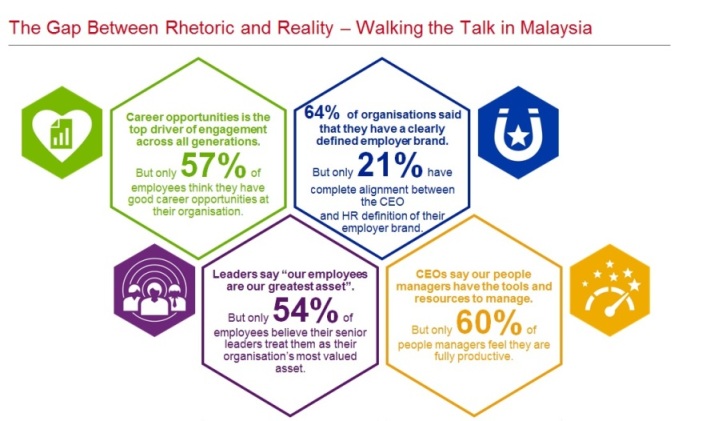 Taking this in purview, the Aon Hewitt salary survey shows however a stability of the salary increases for 2015 at 5.6% and a projected increment of 5.8% in 2016.

Prashant Chadha, Managing Director of Aon Hewitt in Malaysia said: “With a rocky 2015 and shrinking budgets, organisations must make rewards decisions not just with reliable data but also driven by the bigger picture and economic climate.”

Aon Hewitt Total Compensation Measurement indicates that overall salary increment in 2015 and projected salary increment in 2016 remain relatively consistent across all employee categories whereas variable payouts (performance bonus) increased slightly in 2015 to about 2 to 3 months of annual base salary and are projected to remain stable in 2016. Aon Hewitt 2015-2016 Malaysia Salary Increase Survey shows higher salary increases projection across most industries in 2016.

Nur Amani Yusnida, Aon Hewitt Performance, Reward and Talent Practice Lead in Malaysia said: “With salaries and increases remaining stable since 2011 (average increase of 5.7% over the past 5 years) employers are taking the ‘wait & see’ cautious approach to budgeting salaries.”

“The consistent theme seems to be ‘Doing more with less’, optimising costs wherever possible. Voluntary turnover is trending down this year at 9.5% from 12.2% in 2014 reflecting the volatility and instability of the market conditions in Malaysia.”

In addition, Aon Hewitt’s recently launched Hot Topic Survey provides insights on how organisations are reacting to the recent economic environment impacting both employers and employees in Malaysia.

The study reveals that the highest impact of the current economic environment on organisations comes from the depreciation of the ringgit followed by the implementation of the GST. The recent road toll hike also has a significantly negative impact on employees.

However, employees view the minimum wage increment and increased salary cap for SOCSO eligibility that was proposed in the 2016 Budget as positive.

Surendran Ramanathan, Aon Hewitt Southeast Asia Retirement and Investment Practice Lead said: “The current economic environment has adversely impacted both employer and employees, companies are facing budget constraints whilst employees are expecting to cope with the increase cost of living. Therefore companies should ensure their rewards dollars are spent more prudently to get the biggest bang for the buck.”

The study also revealed that Best Employers compensate their high performers 21% higher than their average performers. This differentiation results in higher employee perception in terms of recognition and performance impact on pay.

Share with your friends:
Tweet
Lessons we learnt in 2015 Two in three Millennials don’t really care about becoming entrepreneurs