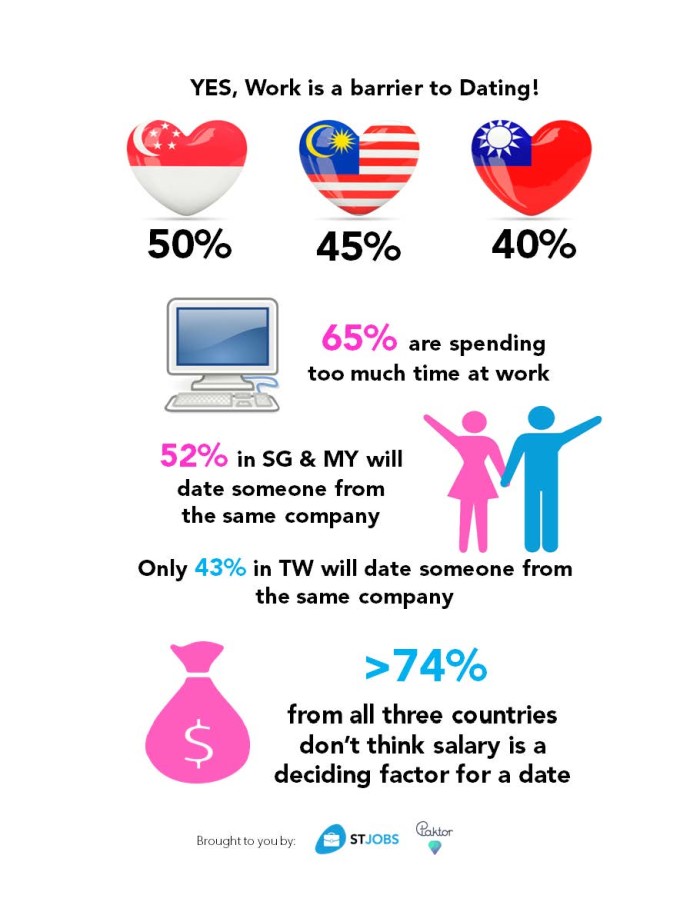 While most people were out dating and celebrating Valentine’s Day yesterday, employees in Malaysia might have been slogging away at their desks.

Surveying 2,418 working respondents 18 and over, STJobs and Paktor found that that close to 65% of respondents in Malaysia and Singapore feel that they are spending too much time at work so much so that relationships and socialising are often pushed to the bottom of the list.

Almost half of employees in the two countries found that their commitment to work has posed as a barrier to dating.

Employers beware, this lack of social time might just see your employees bringing their social life to work.

The survey found that 52% of employees in Singapore and Malaysia reported that they will date someone from the same company. While Taiwanese employees were more conservative with 57% saying that they will not date a co-worker.

ALSO READ: Almost 1 in 4 workers have dated their bosses

With these employees open to dating within the company, who is likely to be the target of their affection?

According to the survey, these employees aren’t picky about earning power when dating and 74% wouldn’t mind dating someone who earns less than them. While another 84% said that they would date an entrepreneur.

Additionally, many of these respondents are also planning their social appointments way ahead of time in order to balance out their work and social commitments. Some of them are even willing to fork out more time to go out after work (now we know what’s going on when an employee comes to work with a hangover in the middle of the week). Share with your friends:
Tweet
Just 56% of companies in China have a leadership development strategy 7 types of employees you need to fire