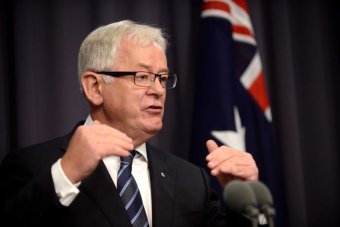 Australian workers could be excluded from jobs as the free trade agreement with China allows a flood of foreign workers into the country, the Manufacturing Workers Union has warned.

Lower tariffs and greater access for Australian exports to China characterise the China-Australia Free Trade Agreement (FTA), but it also allows the importation of workers for some major projects without the need for labour market testing.

The Australian Workers and Manufacturing Union has begun a media campaign to highlight their concerns about the deal, and New South Wales secretary Tim Ayres said the agreement could mean apprentices could miss out.

“This deal will mean that on very ordinary construction projects in our cities and our suburbs, that an investment of just 15 per cent will allow the company to import Chinese workers at lower wages and conditions, denying young construction workers and young apprentices the opportunity for work,” Mr Ayres said.

But Trade Minister Andrew Robb said the campaign was “purely and simply a xenophobic scare campaign designed to distract attention away from the Royal Commission into union corruption”.

“What [the deal] does is ensure that if there is a multi-million … dollar project, which may take a year or two to design and get ready before construction, that companies have the certainty,” Mr Robb said.

“If they sign up to one of these agreements what it says, is that if and when you are ready to start this project, if there’s a shortage of certain sorts of skills — maybe they want 30 types of welders that aren’t available at the time — [and] they’ve got to prove that they’re not available in Australia — then they will over a short period of time be allowed to bring in suitably qualified welders.”

But Chinese investment research specialist at Sydney University’s Business School, Hans Hendrischke, said hundreds of Chinese workers toiling on a project site here was not quite as likely.

“During the mining boom of course the idea from the Chinese side was that they would be able to reduce costs quite considerably by bringing in Chinese labour,” Professor Hendrischke said.

“Of course now that is not really the major issue any more.

“I don’t see at the moment any big projects where it’s quite likely that they would try to bring in labour. And I think their intention was to actually bring in more specialised, more technical personnel than actual labour.”