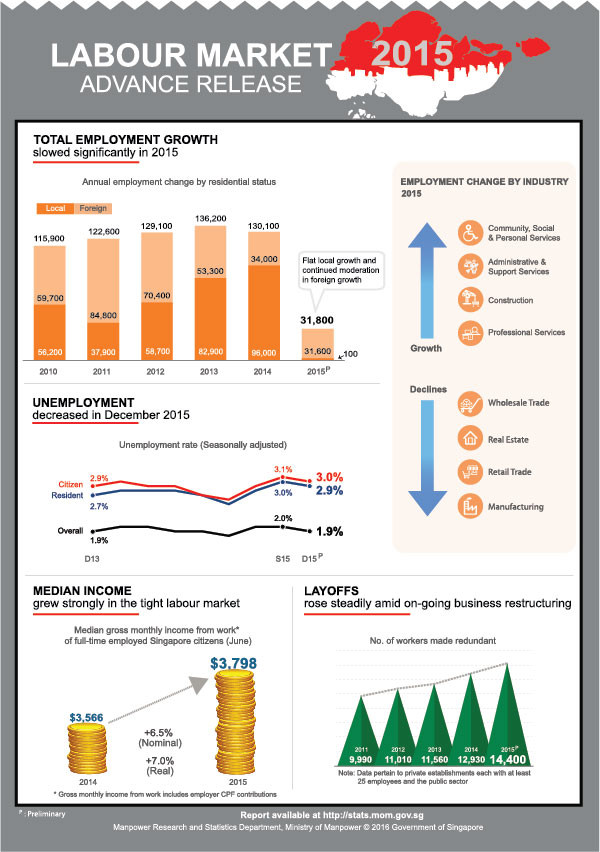 With employer’s CPF contributions included, median monthly income of full-time employed Singaporeans rose by 6.5% over the year to $3,798 in June 2015.

The data was provided in the Ministry of Manpower’s Labour Market Advance Release 2015, which provides preliminary estimates of key indicators on the manpower situation.

Breaking down these 31,800 additional employees, about 31,600 were foreign workers, while about 100 were local workers.

This brought the total number of employed persons in Singapore to 3,655,600 in December 2015, whereby of every three persons in employment (excluding foreign domestic workers), two were locals (66.2%) and one was a foreigner (33.8%).

Data on layoffs in Singapore

However, these declines were offset by employment gains in most sectors – the highest of which were in community, social and personal services; administrative and support services; construction; and professional services.

Other sectors that added workers in 2015 included food and beverage services, information and communications, financial and insurance services, and transportation and storage.

Share with your friends:
Tweet
HR news in brief: Singapore, January 2016 The top 5 triggers of stress at work today