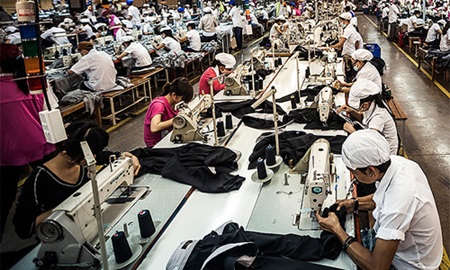 A 12 per cent increase in next year’s national minimum wage would be “reasonable,” a high-ranking congressman said yesterday.

Representatives from labour and business groups failed to reach an agreement on the minimum wage increase at a second meeting on the matter yesterday.

The Viet Nam General Confederation of Labour (VGCL) proposed a 16 to 17 per cent increase while the Viet Nam Chamber of Commerce and Industry (VCCI) said a 10 per cent boost would be suitable.

The minimum wage debate comes amid concerns that the recent depreciation of the dong will put in jeopardy this year’s government’s inflation target of 5 per cent. The government raised the minimum wage 15 percent on January 1 after inflation slowed to 4.1 per cent last year.

“We can’t raise the regional minimum wage by 16 per cent.” said Hoang Quang Phong, vice chairman of the VCCI. “Because it would make employers face financial burdens.”

Raising the minimum wage for labourers was necessary, but it should be based on employers’ ability to pay, Phong said.

The current monthly minimum wage varies depending on the cost of living of a location. The wage in Hanoi and HCM City is VND3.1 million ($137) a month, in Can Tho, Da Nang, Hai Phong and on the outskirts of Hanoi and HCM City VND 2.75 million, in Bac Ninh, Bac Giang, Hai Duong and Vinh Phuc provinces and provincial cities VND2.4 million while in the remaining loclations VND2.15 million.

A third meeting between labour and business groups is scheduled for September 3.

If an agreement is not reached at the third meeting, the national salary council will ask Prime Minister Nguyen Tan Dung to decide the matter.