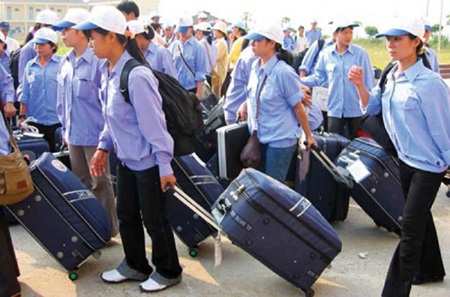 The Department of Overseas Labour (DOLAB) under the Ministry of Labour, Invalids and Social Affairs (MOLISA) is taking steps to protect all of its workers overseas after female domestic helpers were maltreated in Saudi Arabia late last year.

Deputy head of the department, Tong Hai Nam, said that helpers were not covered by a labour code.

“Helpers are open to abuse and work overtime because their jobs depend on the families that hire them,” Nam said.

He said that they faced difficulties in accessing support services or trade unions.

The workers asked for help after being maltreated by their employers.

Tin tuc (News) newspaper last week reported the case of a young woman from HCM City who started working in Saudi Arabia early last year, but was soon harassed and hit by her boss.

She told her family about the maltreatment and asked for help from relevant authorities.

The DOLAB reported that about 16,000 Vietnamese guest workers are in Saudi Arabia, including 5,000 helpers.

Deputy head of the department Nam said that the governments of Viet Nam and Saudi Arabia had signed an agreement protecting workers’ rights.

Under the agreement, Saudi Arabia’s Labour Ministry is responsible for ensuring Vietnamese guest workers have accommodation and residential permits and are able to keep contact with their families.

Employers must ensure to pay proper wages and allowances, buy insurance and give helpers time off.

The DOLAB has told labour exporting companies to provide candidates with information on the culture and customs in the host country – and on contract conditions.

Nam said that guest workers often felt depressed when coping with cultural and lifestyle differences because of lack of information.

The DOLAB has reported that about 56,173 Vietnamese labourers, including 16,942 women, worked overseas in the first six months of this year, a 1.7 per cent increase compared with the same period last year.

Taiwan is the top market for Vietnamese workers with 7,505 labourers, followed by Japan (with 2,324 workers), South Korea, Malaysia and Saudi Arabia, besides Qatar.

The MOLISA has signed and implemented a memorandum of understanding (MoU) with South Korea on sending Vietnamese workers to that country under the Employment Permit System (EPS). The preparation for the signing of MoUs between Viet Nam and Thailand, and Viet Nam and Malaysia on labour co-operation is under way.

The DOLAB supported enterprises to carry out contracts on sending labourers to Saudi Arabia and Qatar and in dispatching apprentices to Japan in the construction and shipbuilding sectors since April. The department has also implemented training programmes on vocational skills, foreign languages and other necessary knowledge required by people who want to work as domestic workers in Taiwan.

Last week, Viet Nam and Germany signed a letter of intent regarding Vietnamese citizens working in Germany as caregivers. This is a good opportunity to increase the number of Vietnamese labourers going to that country to between 500 and 700 per year.