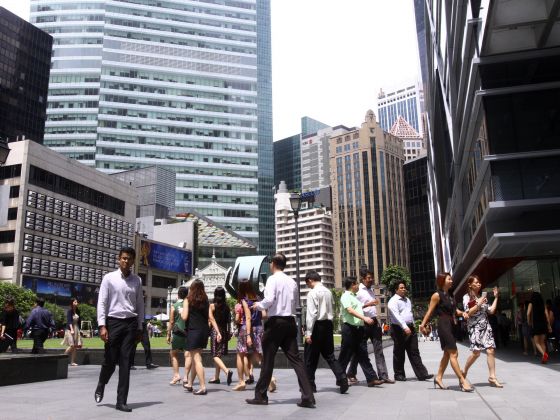 Responding to the numbers, economists said this year’s wage growth rate may not be sustainable for companies, especially small and medium enterprises, given the forecast of slower growth, as well as rising costs.

While CIMB Private Banking economist Song Seng Wun expects income to continue growing next year, the rate could be more modest if “the global economy continues to sputter along”.

“The bottom line here is you need to bump up the wages if we’re not going to be able to import as many foreign labourers for this kind of work as before,” he said, citing the two British bus companies entering the public transport market under the government contracting model, and incentivising the sector with attractive work conditions and pay packages.

Mr Song added that for lower-income workers, salaries are expected to continue growing, given initiatives catered to them, such as the Progressive Wage Model in the security and cleaning industry, as well as the tight labour market conditions and curbs on imported workers.

The MOM’s report today showed a “sustained rise” over the last five years for incomes at the median and lower 20th percentile. Median income rose 16 per cent or 3.1 per cent per annum, after adjusting for inflation. Lower-wage workers’ incomes grew by by 11 per cent or 2.1 per cent after inflation.

UOB economist Francis Tan, however, cautioned that rising wages adds to the woes of SMEs, with external factors like slower economic growth and higher interest rates increasingly eating into their revenue.

Noting that income growth has probably outpaced economic and productivity growth in recent years, SIM University economist Walter Theseira added: “The question is how much more room businesses have to raise wages. While they need to do so — in order to attract and retain talent — if they aren’t making profits or aren’t growing, then wage growth could stall or unemployment could rise,” he added.

Overall, the resident labour force participation rates rose for the fourth consecutive year to 68.3 per cent in June this year, helped by the introduction of flexible work arrangements and efforts to enhance the employability of older workers.

Among older workers, more than half of women aged 55 to 64 and 80.1 per cent of men in the same category were employed this year.

Meanwhile, a growing proportion of workers above 50 years old and non-degree holders have been without jobs amid slower employment growth in the first half of this year.

Non-seasonally adjusted unemployment rate for older workers rose to 3.3 per cent in June from 2.8 per cent last year. For those with diploma and professional qualifications, 4 per cent were unemployed in June this year, up from 3.6 per cent last year.

Commenting on the rise in unemployment among older workers, Dr Theseira said the figures do not signal any dramatic changes yet, especially since labour force participation rates of older workers have increased significantly in recent years.

But Mr Song said the figures indicate that barriers such as businesses’ perception of their productivity and older works’ willingness to take pay adjustments are still at play. As for non-degree holders, issues such as businesses not recognising diplomas from private institutions and pay expectations of these graduates could be reasons why they are taking longer to find jobs, he added.

CORRECTION: In an earlier version of this story, we wrongly reported that the nominal median monthly income of full-time residents rose by 5.4 per cent to $3,949 in June. The 5.4 per cent rise relates to real median income growth over the year. The $3,949 figure is the median monthly income level for June 2015. Also, we had said the unemployment rate fell for those aged 50 and over. This was also wrong. The unemployment rate fell for those aged 25 to 29 and in their 30s and 40s. We are sorry for the errors.