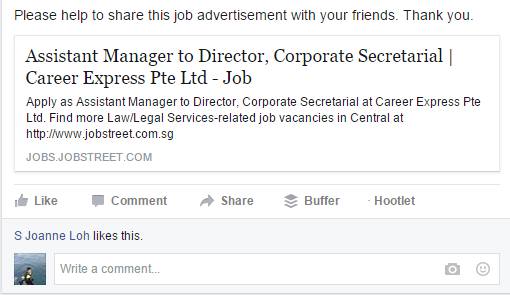 19Almost every recruiters I know would have a social media account. It is a god send really. Years ago when I first started my recruitment business, the only social media was Friendster. And we don’t really use that to recruit anyone.

Now you not only have a better alternative in Facebook but you also have niche sites such as LinkedIN, Twitter, GitHub, Xing, Google+ and even Instagram.

According to Hashmeta, Singaporeans are one of the most active social media consumers in the world. Since almost everyone is on one social media site or another, it make sense recruiters would go there too.

But unfortunately, the best recruiters could do is simply spamming their timeline with ambiguous job descriptions with no visuals and hardly any magnetic statements to increase click-through rate.

For an industry that is double the size it was two years ago, we surely haven’t learn to harness social media correctly.

With such vast number of people online, it make sense to put your plant where the sun is shining. But this doesn’t mean you doesn’t water it and give it fertilizer.

You need to work at it to make sure it stands out and people notice.

Although there is huge traffic on Facebook, capturing their attention can be tricky.

As I shared earlier, one of the reason why most people will look past that ad is because there are plenty of others more interesting postings.

Let’s look at the basic mechanics to making that post stand out and effective:

It’s a no-brainer to make sure you have an image with your post.

And you would notice that image sizes appear to differ from post to post. Facebook will auto scale your image depending on the size and layout (square, landscape or portrait)

There is a entire blog post on this by the folks from Buffer.

The best way for image display is to upload a landscape one. This will ensure your image gets maximum screen space.

I’m using Buffer’s recommendation and selected an image that is 1024 x 512 pixels. I highly suggest you use your phone to take a unique picture rather than find a stock image (like I did here)

However you would notice that the content from the url won’t be picked up unless the picture is taken away.

It is possible to have the best of both worlds. You can see an example from one of my recent post:

But this can only be done if the image is designated as the one that facebook should grab when you share the url. And this might not work perfectly if the image is of inferior size.

An alternative is to use solution such as CoSchedule. It will allow you to use the url and customize the header, image and content.

It’s a worthwhile investment if you are serious about recruiting successfully on facebook. And you can trial it for free for 14 days if you register via the link from this post.

According to Wikipedia, advertising is a form of marketing communication used to persuade an audience to take or continue some action, usually with respect to a commercial offering.

To use the movie analogy, your advertisement is supposed to be the official movie trailer.

There are a few ways to do that although the means and ways could be limiting for external recruitment agencies in a bid to ensure the confidentiality of the client.

But you still can sell other stuffs without getting the name across:

Even if the company is a small one there are still things to sell across such as the culture, the dynamism, the opportunity to scale the ladder quickly, etc.

How would you know if your ad is useful if you are not tracking its traffic?

Turn your usual url into a trackable link by using https://bitly.com. You will get something like this:

You would need to create an account with Bitly in order to make this work.

Once you have login, enter the url into the space on top and bitly will automatically create a bit.ly link that you can use and track the traffic with.

To track, simply login to Bitly again after some time and you should be able to see traffic movement display on the right.

From here I can see that there had been 113 clicks on this specific bitly link.

With 3.8 million Singapore users and growing, Facebook is a platform that many cannot afford to ignore.

And all your target audience are there.

You can even do deep to target them by their demographics if you choose to sponsor your post. At a few cents per view, it is peanuts compared to the 5-digit fee when the placement is made.