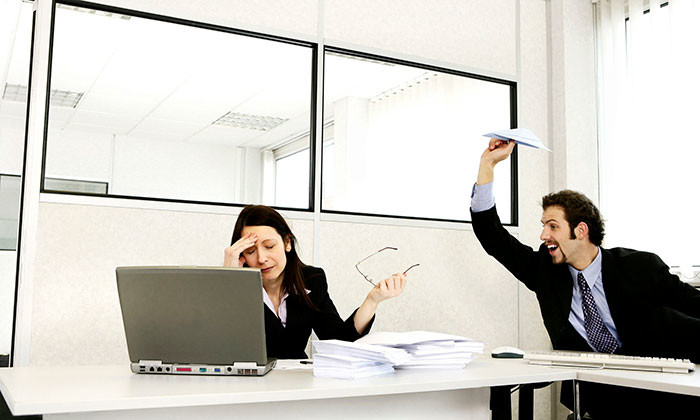 Open plan offices can help increase productivity and teamwork, however, it also increases the chances of productivity being hampered by these exceedingly annoying colleagues.

Surveying over 1,400 working professionals, TimeJobs.com found that nearly 60% respondents blamed the behavior of coworkers for hampering their workplace productivity.

To make things worse, nearly 75% of them said that coworkers tend to interrupt them for over an hour over the course of the day, taking a big toll on their productivity.

The survey also shed light into the five types of annoying colleagues you meet at the workplace and they are:

In terms of gender, male colleagues were found to be more annoying as compared to their female counterparts this was according to 52% of respondents.

Their most annoying aspects? – poking coworkers on social media and being chatterboxes.

On the other hand, female workers were found to be annoying for invading into coworkers’ privacy and cribbing.

When it comes to seniority and experience, 42% of respondents thought that middle-level employees the most annoying set of coworkers.

“For candidates, fitting into the work culture of an organization is critical for success. TimesJobs encourage candidates to review all aspects such as organizational culture, work-life balance and growth prospects that are critical to professional success with its extensive repository of company reviews and ratings,” said Nilanjan Roy, head of strategy, Times Business Solutions.

“And employers too must hire attitude and train for skill. Progressive organisations use TimesJobs’ innovative proficiency graphs to look beyond a candidate’s basic qualifications and evaluate their communication, analytical, creative, planning, organising, leadership and interpersonal abilities, to ensure a good fit,” he added.

Share with your friends:
Tweet
Celebrating National Day with local delights Should staff be allowed to use emoji at work?