The most attractive employers in the world

The most attractive employers in the world 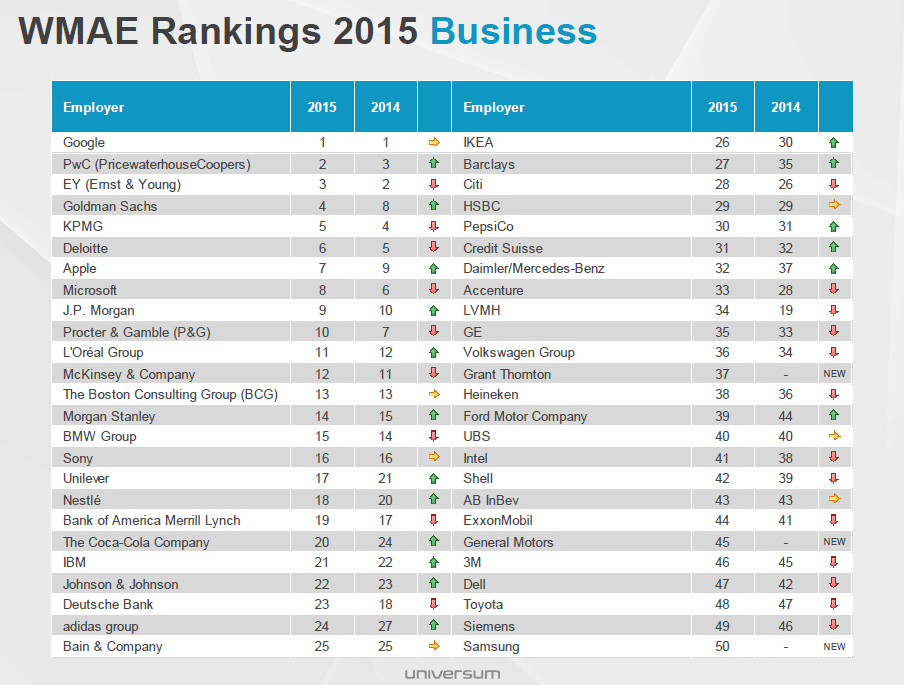 Looks like working in the Big Four consulting firms, KPMG, Deloitte, EY and PricewaterhouseCoopers (PwC), is all the rage this year.

All four firms took top positions in Universum’s new ranking of the world’s most attractive employers this year.

Polling more than 240,000 business and engineering/IT students, the report ranked PwC as the second most attractive company to work for in the world according to business students. ALSO READ: The 10 most desirable companies in Singapore

“Millennials’ greatest fear is to be stuck without the opportunity for professional growth and development. Professional services firms like PwC and EY continue to pull the highest rankings in this regard; other industries should benchmark how this sector nurtures employees through training and mentoring,” the report stated.

It added that storytelling is critical for firms to become attractive employers, as Millenials want to learn about employees who embody oganisations’ values and communicate authentic stories about their working life.

“The Big Four accounting firms do really well across the world because people are their strongest asset, and they know it. The Big Four really look after their people well, but, above all, they communicate their employee value proposition early and honestly, so incoming talent knows exactly what they can expect,” said Joakim Strom, managing director APAC, Universum.

He expanded that the Big Four’s popularity can also be attributed to the fact that they offer some of the best training and development opportunities available across any industry.

Slightly different preferences, however, were observed by engineering/IT students when it came to their most desired employers.

While Google still came out tops, tech firms such as Microsoft and Apple took second and third place respectively.

BMW Group and GE rounded up the top five respectively. Share with your friends:
Tweet
Why HR professionals in Hong Kong are unhappy What HR can learn from family businesses