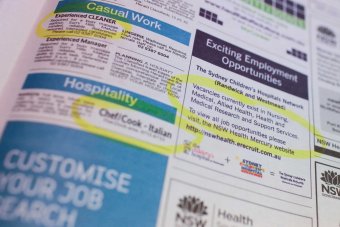 Economists were typically expecting 10,000 jobs to be created and unemployment to rise to 6.1 per cent.

The reason why unemployment jumped despite much better-than-expected jobs growth is that the participation rate soared 0.3 percentage points to 65.1 per cent.

This rate measures the proportion of people either in work or looking for it compared to the population aged 15 years and over.

This means that more people were looking for work, soaking up all the new jobs and then some.

“We did see the unemployment rate rise but given job growth has also been quite strong it’s still a positive,” she told Reuters.

“The jump in the unemployment rate was because the participation rate jumped, and that means more workers are looking for jobs.

“This data supports the view that the labour market is on solid footing and, if anything, it’s probably lessening the chance of another rate cut.”

In another puzzling piece of data, despite a 12,400-strong rise in full-time workers and increase in part-time employees of 26,100, total hours worked fell 0.2 per cent in July.

The more stable trend unemployment rate, which smooths out monthly volatility, remained unchanged at 6.1 per cent.

The employment to population ratio – which measures the number of employed people as a percentage of the total population aged over 15 – actually increased 0.1 per cent, seasonally adjusted.

Share with your friends:
Tweet
9 Kinds of Employee You Should Fire Fast Will Wearable HR Technology Revolutionise the Workplace?