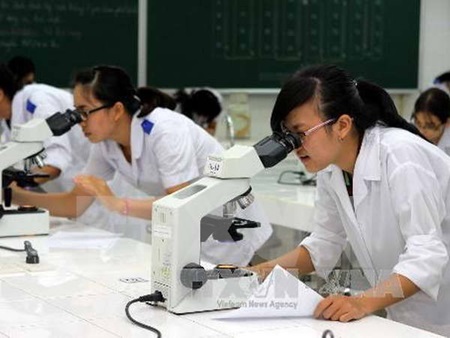 The Ministry of Education and Training said the professional-oriented high education (POHE) model must be used at universities and colleges to make sure graduates are qualified to get jobs without needing to be retrained.

At the conference held last week, Nguyen Thi Kim Phung, acting head of the Ministry of Education and Training’s Higher Education Department, said that employers’ demands for labourers’ knowledge, soft skills and work attitudes were increasing. But these skills have remained shortcomings for new graduates.

Reforming higher education has become one of the ministry’s main tasks. The connection between universities and colleges and enterprises was given priority to create more chances for new graduates to get jobs, she said.

Figures from the Labour and Social Sciences Institute showed that nearly 178,000 people with bachelor’s and masters’ degrees could not find jobs in the first quarter this year, an increase of 16,000 over last year.

In the first quarter, more than 1.1 million were unemployed nationwide, an increase of 14,000 on the year.

Phung said the application of POHE at eight universities and colleges nationwide from 2013 to 2015 has proved successful initially. More than 4,800 students graduated with high qualifications.

More than 10,100 students are studying under this model in the fields of agro-forestry, technology, economy management and education. These students were expected to be high-quality labourers when they were graduated, she added.

The programme was implemented previously from 2005 to 2009, funded by the Netherlands Organisation for International Co-operation in Higher Education.

PhD Bui Anh Tuan, director of the POHE programme, said that the programme’s interactive teaching methods helped students build teamwork and problem-solving skills – the important soft skills that labourers must master if they want to get jobs.

In order to effectively apply the model at universities and colleges, Tuan said the programme has set up five centres to train teachers the new teaching methods