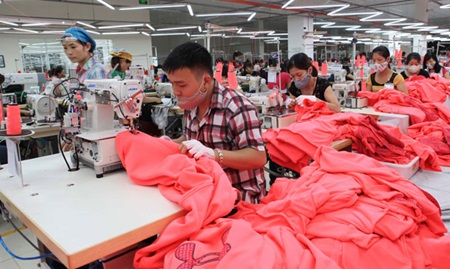 About 34 per cent of labourers surveyed recently said they were not satisfied with their jobs or pay, a workshop on the subject was heard yesterday.

However, most complainants said they would stay with their present employer because there was no where else to go, according to a survey by the Viet Nam General Confederation of Labour.

The head of the Institute of Workers and Trade Union’s scientific research division, Dang Quang Hop, said 1,600 workers in 60 enterprises were contacted. They operate in the clothing, textiles, footwear, construction, transport, mechanic, electronics and agro-forestry-seafood industries in 10 cities and provinces across the country.

“The survey, carried out in April and May, revealed that labourers were mostly concerned about stable jobs and adequate wages,” said Hop.

“Additional incomes come from overtime, allowances, and subsidies. This means the basic salary only makes up from 75 to 80 per cent of their total income,” said Hop.

“Therefore, if labourers do not work overtime, their income will certainly go down, which makes their life harder.”

Explaining the difference among zones, a representative from the labour confederation said employees in zones one and two where industrial parks were concentrated had to rent accommodation, and pay for electricity, water, and childcare bills. The cost of services and other essential services and food was often seven to 10 per cent higher than in neighbouring areas.

The Viet Nam General Confederation of Labour will base on the survey results, with reference to the National Salary Council, and propose the Government adjust the zones’ minimum wage in 2016.